O wow this month went FAST! Of course it is a couple of days shorter, even though we had one day more this February, but it went by so fast I was having a hard time keeping up with myself and my schedules. For reading I luckily don’t have a schedule. And even though it was “just” 29 days I still read 7 books. Can you believe it? SEVEN BOOKS! And two still reading.

On my read list below are 8 books as I have hit my first DNF this year. 6 out of these 8 books came from the library (I am loving my new subscription!) and 5 out of these 8 are reads for the #StartOnYourShelfathon challenge.

Just a reminder to understand what the colors on my star-map mean:
Purple for physical books, blue for ebooks and… silver for books I own as ebooks but instead borrowed physically from the library. All the other books I will read will be colored yellow for books I already own and green for new/others. And books I did not finish will become pink..

And this is how my #StartOnYourShelfathon BuJo-pages are looking right now! 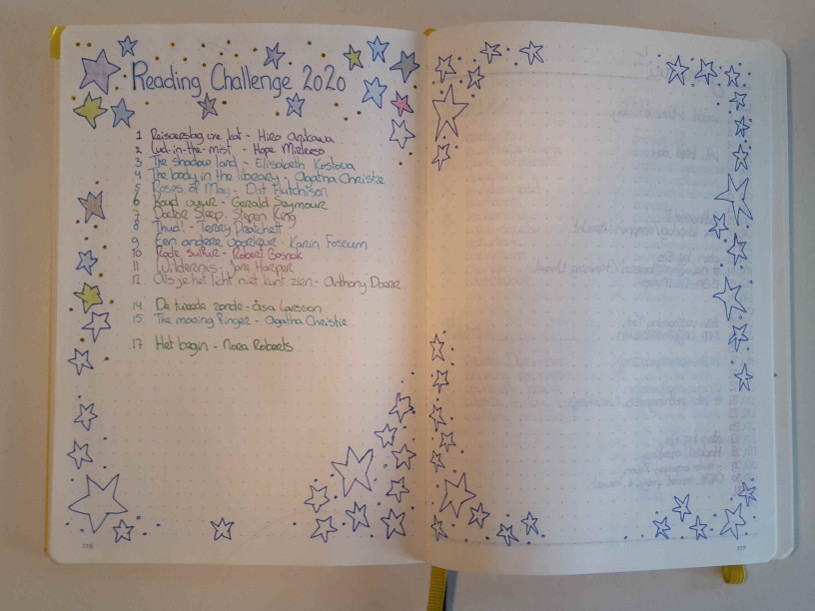 So let’s get to it! What did I read this February?

8. Thud! (City Watch #7) by Terry Pratchett 5/5 (blue star)
It took me a while to get into the City Watch series, even though I liked the first one from the start I am not a fantasy reading person. But now that I got to the eight one, which is giving me many laughs, many goosebumps and even almost some tears, I can’t help to get curious about the other Discworld series.

Thud! is is truly a good hunt for history, touching some very real-world problems in a very understanding way. I like the adding of the vampires to make the subject of racism even more real. I have some trouble putting into words the mount of emotions this book leaves me with. I truly can’t believe how stupid we people can be, but Terry Pratchett has put it into words in an entertaining way, again.

9. The waters edge (Konrad Sejer #8) by Karin Fossum 2/5 (blue star)
After reading Thud! and the feeling it left me with, I needed a simple read. Murder investigation time it is! But this one turned out to have a hard subject and the writing wasn’t very good. I know Karin Fossum can write and I don’t think this was a bad concept, so it was probably badly translated? She got balls too, writing so thoroughly about child molesters (including their point of views). I wouldn’t want to be her having to research this subject to be able to add all these facts. Overall this book was “just ok”.

10. Red sulphur by Robert Bosnak 0/5 (pink star)
I did not like this book and also did not finish it. I took it home from the library because it was advertised as historian fiction, set in The Hague, a Dutch city. This seems funny to me, because I am Dutch myself. Somehow I couldn’t connect to the story, and after reading till page 78 I decided to toss it. The main male character is kind of whiny and weird about women, desperate even. The story itself is not coherent enough, lots of pages are just a summery of things and not making sense as a whole. And this being a book about chemistry I would expect some more well, chemistry NOT of the sexual kind but of the actual science kind.

11. Force of nature (Aaron Falk #2) by Jane Harper 4/5 (silver star!)
I got myself this book when I was planning a hiking trip last year, but found out this was a sequel so during the trip I read the first Aaron Falk’s story. Now that I have read this one, that was probably a good idea! Feeling the feelings Force of nature gives you, while actually being in a wilderness must have been very suspensive. The story is written good, the investigative event interchanged with the investigation, to make the story complete. Both angles are interesting and exciting to follow. And both angles are good on its own. While you could read this second Aaron Falk as a stand-alone, it also connects to the first novel and gives you more insight on his personage. But this is so wrapped inside of the investigation that it becomes a tight fit. Really well done!

12. All the light we cannot see by Anthony Doerr 4/5 (silver star!)
It has been a while since I read anything Second World War related as they all started feeling the same. But this one was different. I especially liked the scientific undertone, the transmission radio’s, Jules Verne, Frederique’s birds, the science of snails… It isn’t often that the subject of such an emotional story is based on science. I doubt if most people pick up on this, but for me it was the bonding factor, the rest was just survival.

13. Still reading this one.

14. The Second Deadly Sin (Rebecka Martinsson #5) by Åsa Larsson 2/5 (green star)
I got this one randomly from the library, without reading the other 4 first. I had high hopes for this crime thriller, as it has won a prize of best Scandinavian thriller. I don’t get why though. It isn’t a bad story, but it is no surprise either. There are many hints and aside from the part with Vera (which I could also see coming from afar) I had no emotions. The format was indeed good and the story on it’s own was complete, but it was “just another crime thriller” to me.

15. The Moving Finger (Miss Marple #4) by Agatha Christie 4/5 (blue star)
This Miss Marple was a pleasant one, even though Miss Marple herself was hardly present. She still fooled me, I was so close!! The two main characters were very pleasant people to read about and the mystery of the letters was a really nice touch. A truly comfy crime classic!

16. Still reading this one.

17. Year One (Chronicles of the one #1) by Nora Roberts 3/5 (green star)
I didn’t know Roberts wrote apocalyptic dystopian supernatural fantasy, and it wasn’t bad. There as still an amount of romance but not too annoying, there was only one part I skipped through because it was too mushy. The overall story-line is well executed and funny to read when we have the Corona-thing going on in the real world. I did think it was a bit off that you only read the “light” story, I would like to know more about the “dark” story too. That was missing. And some things were a bit too obvious, like “who was sacrificing deer in the woods near the cabin?” I am not sure when I would like to read the next, I did like this one, but it isn’t at the top of my fantasy list.

So these were my February 2020 reads. Have you read any of these too? What did you think about them? Do you have a recommendation for something similar? Or is there anything you would like to know? Ask me in the comments!