It has been quiet at the blog lately, due to being ill for two weeks, the current happenings in the world and me exploring being an introvert there wasn’t much time I felt like publicly writing. March is normally a very busy month for me, lot’s of family birthdays and the start of the growing season coming together while work is preparing for the upcoming holiday season is usually a very stressful time for me with no room to breath. Now that the world fell quiet due to the corona virus I am very much enjoying having all this time to myself, living from day to day, not having to plan anything. It’s so calming!

This doesn’t mean I haven’t been doing stuff at the allotment. Not at all! It’s still the sowing and prepping days of this years growing season. So here’s what I have been up to. 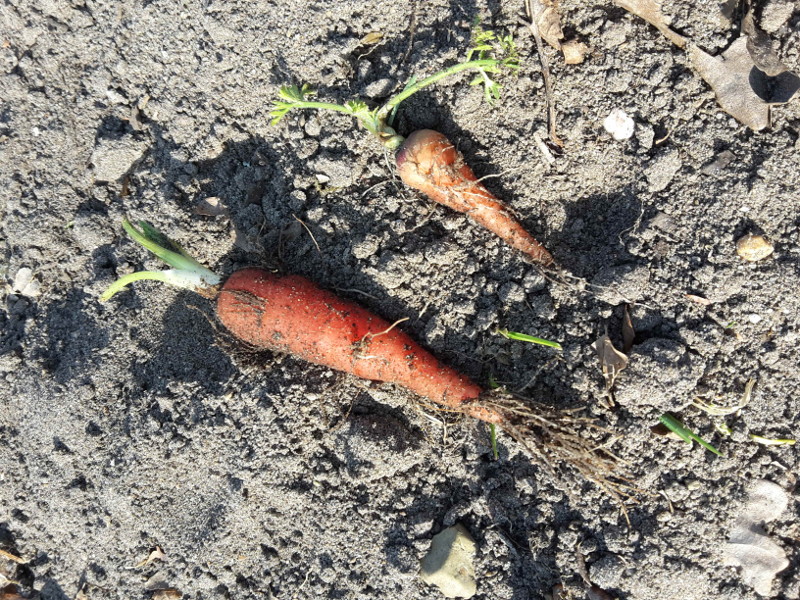 While weeding last years carrot bed, I harvested the tiniest carrots ever! The left one isn’t longer than my pinky. I had such a laugh about this! Last year was a bad year for carrots, but at least now I got these. :-p 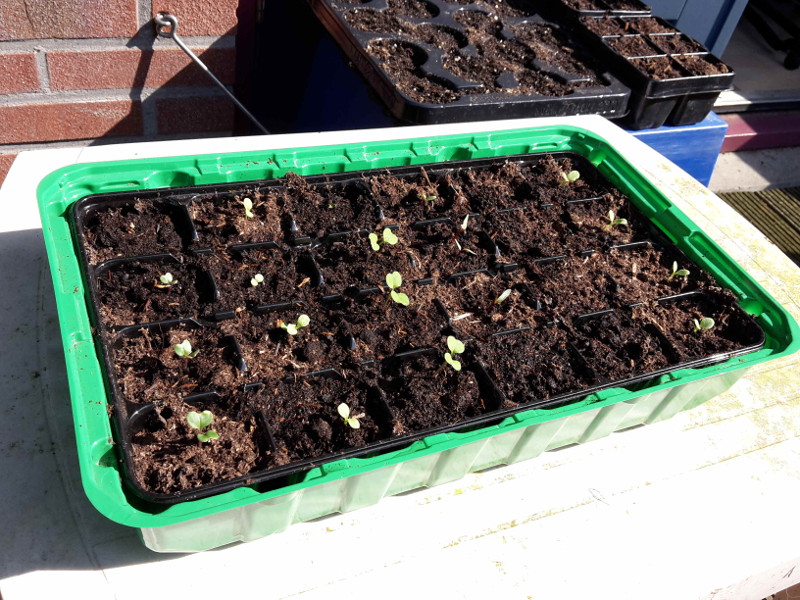 Every gardener has that itch at the beginning of the season and when things go different they start to get scared to “fall behind”. When I got ill at the beginning of March, I had that same scare in my second week of illness. I didn’t think I could go up to the allotment soon, so I started sowing at home. This tray is one of them and in the back you can see a tray of red onions and broad beans too. 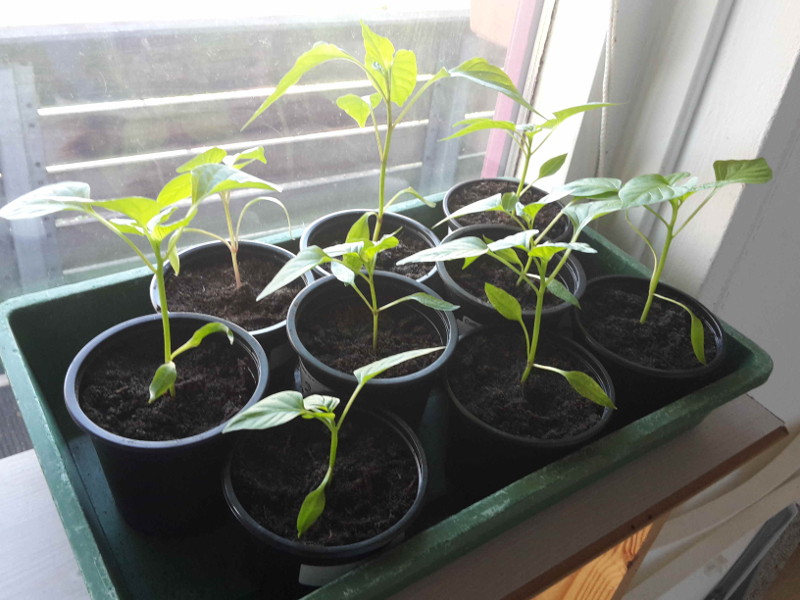 The sweet peppers are doing well, 12 out of 24 seeds sprouted and they have been transplanted to P9. They will probably get transplanted to P15 later in April/beginning May before they go up to the garden when the garlic is harvested. 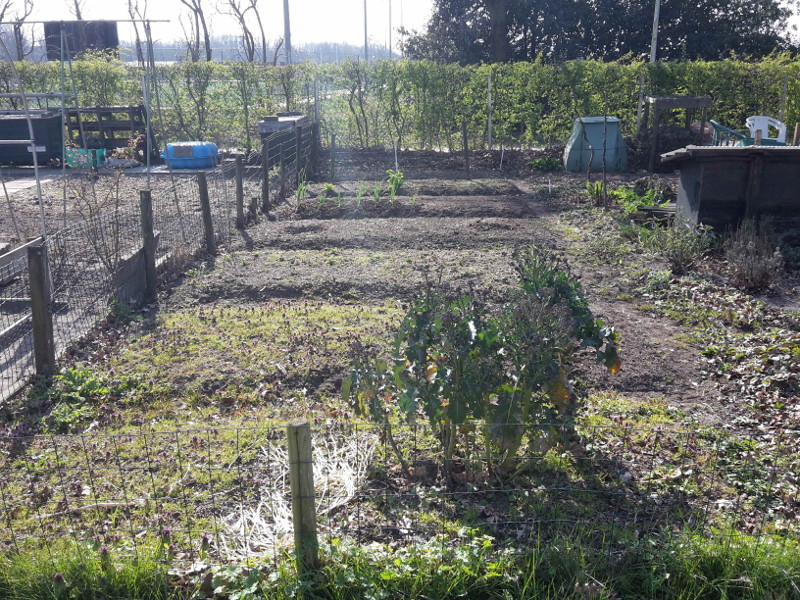 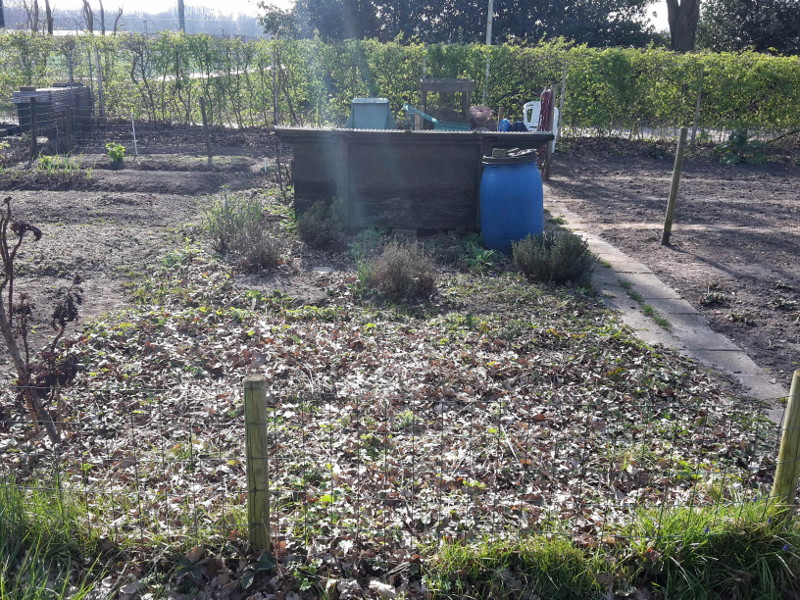 And then at the end of March I finally could go up to the garden again! Hurray! I have transplanted some herbs in the herb bed, weeded a lot of beds to prepare them for sowing, mulched the garlic with compost, harvested parsnips and wild garlic and more broccoli and prepared the compost mounts for the pumpkins. There is still a bunch of weeding to do, my first beds always get invested with grass from the main path, so annoying. I also did some of my first direct sowing; summer carrots, winter carrots, parsnips, peas. And the broad beans seem to be doing well! The mice didn’t get to all of them. 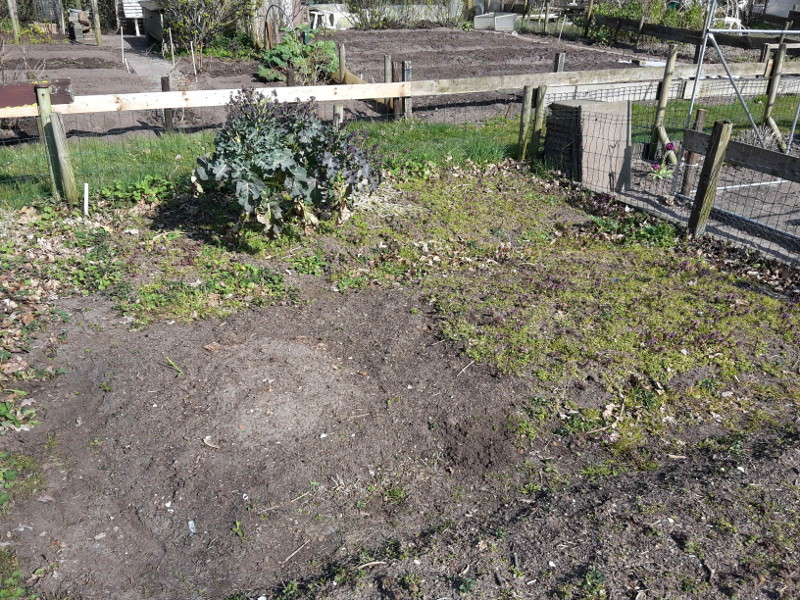 Bed one and two. The first one needs to be cleaned up in april to get the potatoes in. The second one is weeded halfway and the first mount of compost for the pumpkin is in place. As you can see I am still harvesting brocolli! 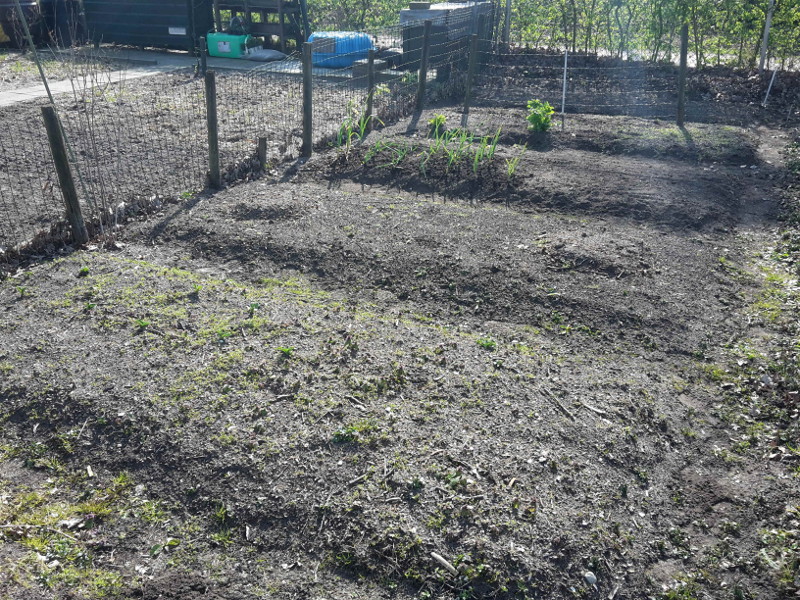 Bed three to seven. These have both been weeded and sowed in. In the first one (bed three) there are broad beans just coming up, they can be weeded soon. Bed four has been weeded and got two compost mounts for pumpkins. Bed 5 has the mulched garlic. Sadly I didn’t have enough to to a half bed so there’s only a quarter in. But the winter carrots are also sown and when the garlic comes out, the sweet peppers can go in. Bed 6 still has two parsnips in, they will be harvested upcoming week. And the first row of peas is also sown! Bed 7 is hardly noticable in the picture, but has been fully weeded before I sowed a quarter of the bed with summer carrots. 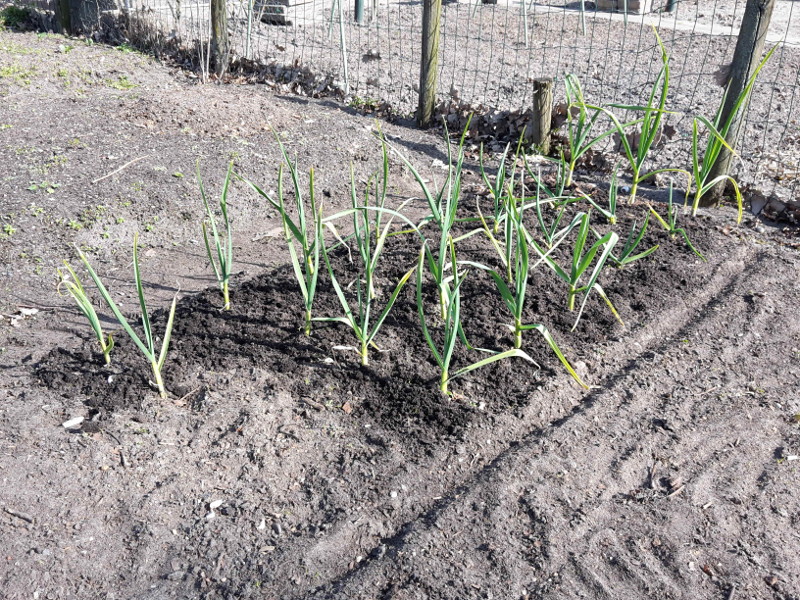 Here is a close-up of the mulched garlic. They are looking well! 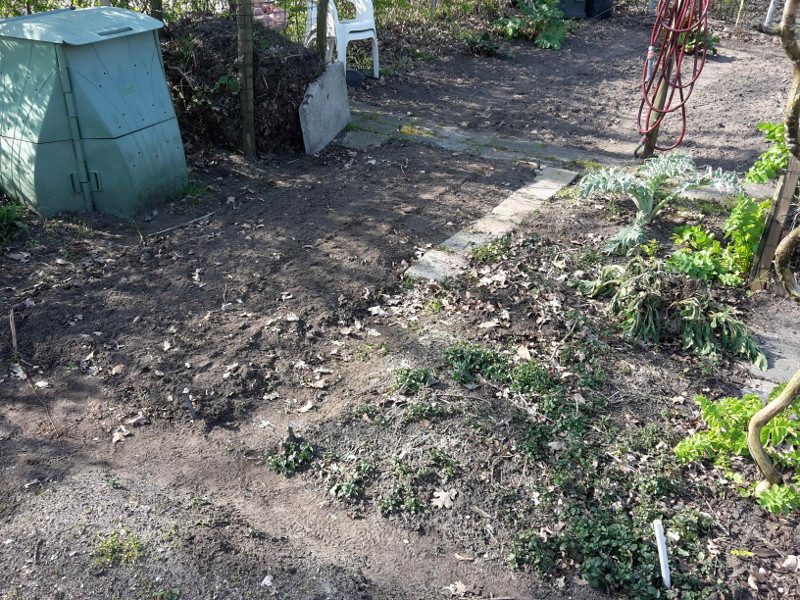 These two beds have become a mess last year. The left one is now fully tidied and has the first row of parsnips sown into. The right one still needs some love. 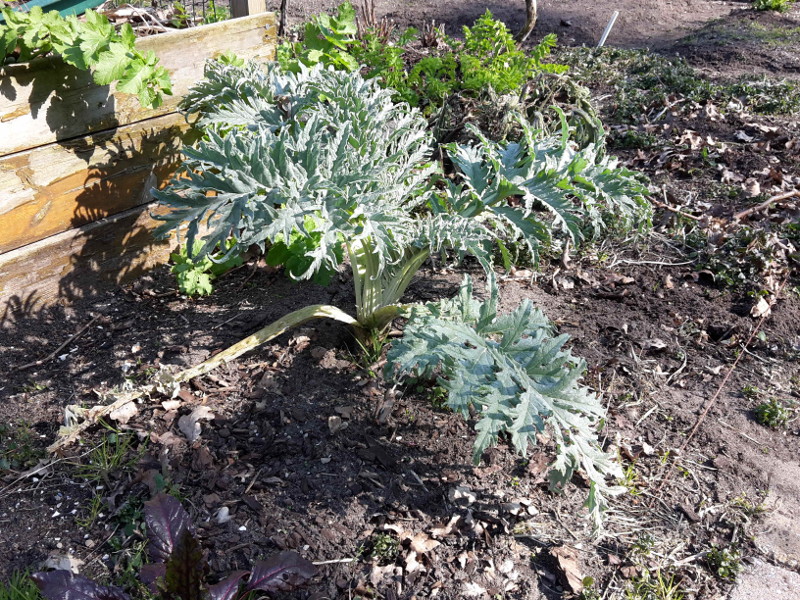 I am very pleased with the artichoke though! I finally managed to get one grown big enough to start producing. It took me three years of sowing and trying to get here. This plant has been sown february 2019. 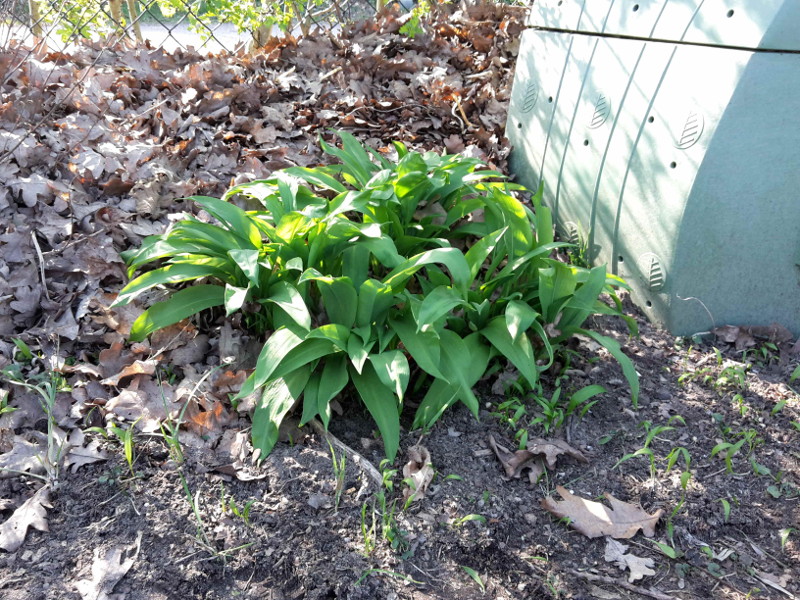 And here’s a peek of something you only see in the garden during March and April, my wild garlic! I harvested some of the leaves to make a batch of garlic butter which is now in the freezer. The flowers are coming up already and after that the taste declines. And after the flowers are gone, this garlic goes into hiding again until next year. I spotted a lot of little self seeded wild garlic this year. Maybe next year it will be a tiny field of wild garlic leaves!

How is your garden doing? Are your beds fully prepped and have you started sowing? Or did you also get one of these cold spells suddenly? Which plant are you happy to see coming back in growth this spring? Let me know in the comments!

1 thought on “The allotment: spring tour”