July has been a weird month for me, but I still managed to squeeze 7 books in. It doesn’t feel like I have been reading much though, as two of them were books I went through in about an hour or so and there were many days in which I didn’t even touch a book at all! By my scores you can also see this wasn’t the best month for reading. They were rather average or just plain boring. Only two stood out. But a thing did happen in July, let me tell you about that instead.

the Geeky Reading Challenge of the IGGPPC Bookworms
I have accidentally started a bookclub with the International Geekgirl Penpal club. Jep, those things happen. We host a channel on the Discord server and a Goodreads group. There will be monthly picks, bookish chats and with hosting a bookclub a reading challenge seemed in order, so we have designed a geeky reading challenge for the rest of 2020. The challenge is to read:
1. something comforting
2. a book about science or technology
3. a recommendation (from a penpal maybe? don’t forget to write them back about it)
4. a book about crafts or arts
5. a genre you never read (expand your comfort zone)
6. a book about space or time travel
7. a non-fiction book about health, psychology or philosophy
8. a book by an LGBTQ+ or BAME author (Black, Asian and Minority Ethnic)
9. a book about books, letters or stamps
10. a book from the perspective of animals
11. a book of fairy tales or fantasy
12. a book in translation
My personal challenge lies in combining my current three challenges. Woops!

#StartOnYourShelfathon update
My last update on this readathon was in April, and back then I started noticing that there are some books on my shortlist I keep skipping. By now I have been reading a couple more.

I still have 11 of these original 35 to be read, but I keep getting distracted by my library subscription. I did manage to sneak in 4 others I already owned that weren’t on the shortlist, so overall I still think I’m doing okay for my first ever readathon.

Just a reminder to understand what the colors on my star-map mean:
Purple for physical books, blue for ebooks and… silver for books I own as ebooks but instead borrowed physically from the library. All the other books I read are colored yellow for books I already own and green for new/others. And books I did not finish are pink..

And this is how my #StartOnYourShelfathon BuJo-pages are looking right now! The second page is almost full now. 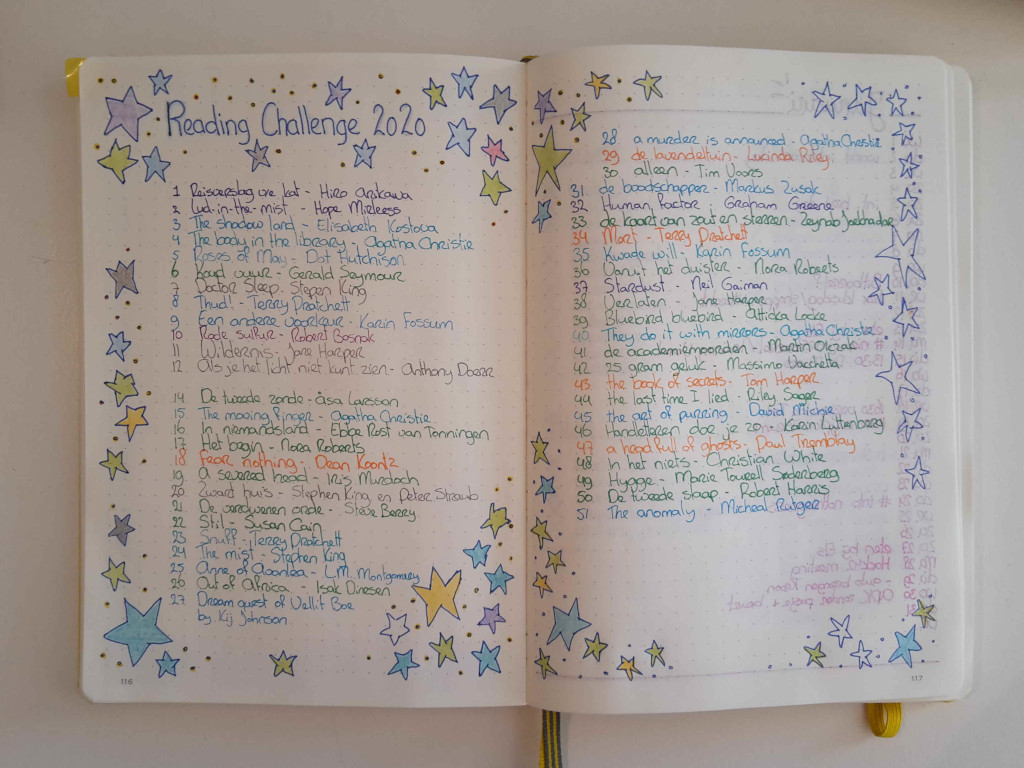 So let’s get to it! What did I read this July?

45 The art of purring (Dalai Llama’s Cat #2) by David Michie (3/5 blue star)
Not as comfortable to read as the first Dalai Lama’s cat, but certainly not a bad read. This one is more about finding your reason to live and finding happiness, which in current time seemed well… not something to worry about at all. It was also about how easy some misunderstandings happen and that’s always a good lesson for me. Looking forward to the third!

46 Handlettering doe je zo! by Karin Luttenberg (4/5 green star)
Yes, this is a Dutch one without an English translation. It’s also more of an instruction book about how to practice handlettering art. It has many useful tips. The only thing I need to do now is to start practicing. Luckily I already got a ton of ideas while reading this and I have been crafting a ton lately, so these techniques will probably come in handy soon.

47 A head full of ghosts by Paul Tremblay (3/5 yellow star)
I think I read about this book on some sort of shortlist a while ago, and got it because it was recommended by Stephen King, but wow did this disappoint! What I expected to be a fast read almost took me forever. Especially the first half was really slow, after that it kinda picked up a bit. The story alternate between present time Merry and Merry as an 8-year old child. I am sad to say sometimes even in one sentence. Overall this story wasn’t exactly well-written and comes off as not even a decent ripoff or other exorcism stories which are frequently discusses in the blog post chapters. The blog post chapters are really annoying and to my opinion don’t give any new information, until you come to chapter 23. That’s where the whole story changes and suddenly does become intriguing, surprising and even more realistic. Sadly you would have to come a long slow way to get to these final bits. I frequently thought I should DNF this one, and even now I have read the ending I wouldn’t have missed this one if I did.

48 The nowhere child by Christian White (4/5 green star)
This one did deliver. It was so intense! A real thriller. It just keeps on giving and you keep wanting to turn the page. I don’t want to spoil anything on this one, but I am really recommending this read if you are into mystery thrillers. It was just amazing!

49 Hygge the Danish art of happiness by Marie Tourell Søderberg (2/5 green star)
This was just an OK read. Hygge is a good word for what it is, comfortable, coziness, being together, connecting and mindfulness all combined, but this book was rather repetitive. It did make me want to try an old Dutch recipe for breakfast, and the pictures (while small) really added to the feeling. But sadly I believe it could have done with even less words to not make it as repetitive as it is.

50 The second sleep by Robert Harris (3/5 green star)
Robert Harris was recommended to me by PenguinUKBooks and I must admit, they weren’t entirely wrong! It took me a couple of chapters to get into this story. It feels like set in the middle ages, but some things didn’t add up to that which was rather confusing. Then suddenly things started happening, it got exciting, the timeline got clear and I just took off reading!

The concept is quite intriguing, as it is set in the future, where an apocalypse has happened in the past (somewhere around our current year). There is a letter in the beginning of the story with some examples which might have happen and that humanity as we know it now is fucked as we don’t plan ahead anymore for our basic needs and knowledge. So true! Which one of the examples made the world crumble down isn’t remembered in the after-apocalypse time though.

When I was nearing the end it felt like it wasn’t time yet for the story to finish. You want to know what happened! Somehow the pages to go got less and less until you get to the final one. Indeed, you still won’t know what happened, but there are other things happening instead.

51 The anomaly (The anomaly files #1) by Michael Rutger (4/5 blue star)
I am not much of a sci-fi reader, but when a cover tells you it’s a mix of Indiana Jones and Xfiles I can’t help to be intrigued! And… did it live up to the task? Yes, it actually did.

The story isn’t fast paced but that’s no bother at all. You get sucked into it right away. The main narrative voice (ehm… main character I mean) Nolan is great to listen to, even though he is human and not perfect and sometimes rather stupid. His character is written very well. The way his psyche is followed during all the events is making him very real and believable, while a voice in the back of your head also tells you it’s all fake and couldn’t be really happening, you still believe it actually is all real.

I kept thinking this book would make a really good movie, and at the end read that the writer is actually a Hollywood screenwriter, so that explains! There is a sequel and I’m looking forward to reading the rest of the series.

And that was it! These were my July 2020 reads. Not bad right? Have you read any of these too? What did you think about them? Do you have a recommendation for something similar? Or is there anything you would like to know? Ask me in the comments!