Hannah came up with a very nice book tag last week, about bookshelves! I don’t always join in on the book tags, but this one I couldn’t pass by. You can join in too, but please do credit her for this fun idea! 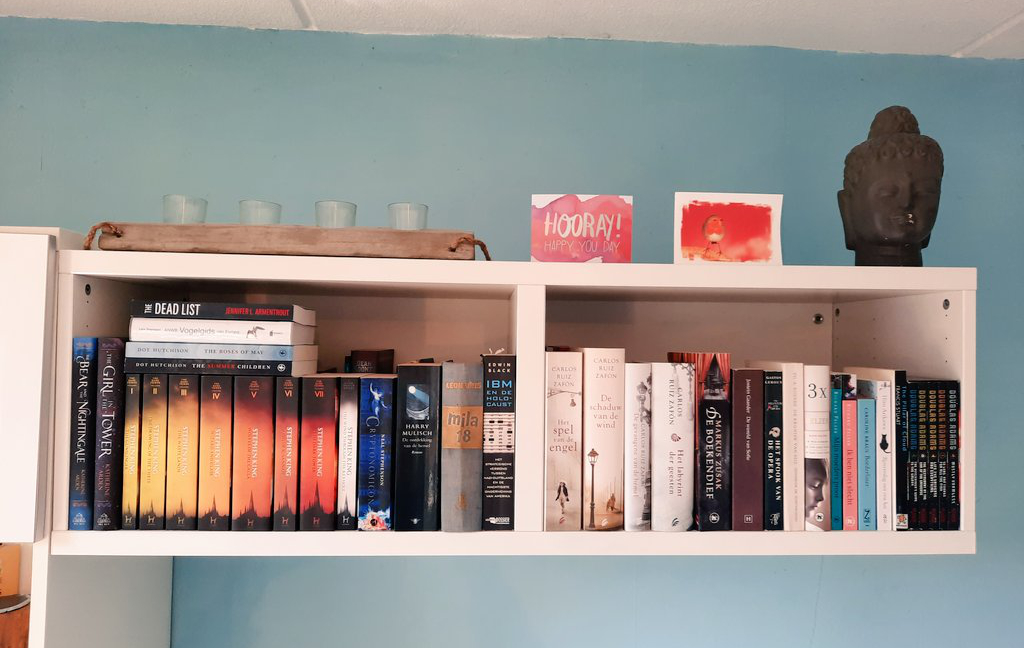 What’s the oldest book on your shelves?
I have quite a lot of old stories on my shelves, but my editions are not. The story of Black Beauty from 1877, and Jules Vernes Propeller Island is from 1895. The Phantom of the Opera is from 1910 and Winnie the Pooh is another old story, from 1926.

What’s a book that you’ll never get rid of?
I want to believe I can get rid of any book on my shelve, but Leon Uris Mila 18 is a definite keeper. This copy used to belong to my partners grandfather. And a rereader!

Which book has been on your TBR for the longest?
That would probably be Steeds leuker by Jelle Hermus, it’s a non-fiction read and I am not always good in reading non-fiction so I keep postponing. This was one of the first (and signed) editions, so it’s been here since 2017. I specifically put it on my TBR for startonyourshelfathon for 2020, but it’s still unread.

What’s the newest addition to your shelves?
That would be Tom Cox’s Ring the Hill. A poetic nonfiction about wandering through the hills. Or as the blurb tells you: “These hills can leads to an exploration of an intimate relationship with a beach, a journey into Cox’s past or a lesson from an expert in what goes into the mapping of hills themselves. Because a good walk in the hills is never just about the hills; it will take your mind to many other places.” I want to read it for Spring!

What’s one book/edition that you desperately want for your shelves?
I’m not very desperate about my books, but after reading the Winternight Trilogy twice on my ereader I wanted to have them in hardback too. I ordered all of them, but the last one (Winter of the Witch) which I ordered in January still hasn’t arrived! And after hearing these editions won’t be printed anymore because the paperback is now available too… well, long story short, I went to Amazon, found a UK Bookstore that is willing to send to the Netherlands, opened the website of the bookstore and it will hopefully arrive this week! FINALLY!

Is there a book you own several copies of?
I do! I have both the Douglas Adams Hitchhikers guide of the galaxy boxset, as the paperback trilogy of four. Once I have read it, I will pass it one to the next hitchhikers geek.

I also own several adaptations to The phantom of the opera, both in books (3) as in movies (4) and musicals (2). I don’t think I would mind owning a beautiful hardback edition.

What’s the longest series on your shelves?
On my physical shelve, that’s The dark tower series by Stephen King. It’s 8 books long, and some of those are over 1000 pages. On my digital shelve it’s Terry Pratchett’s Discworld, which is 41 books long. I don’t have enough space to own them all in print.

How do you organise your bookshelves?
As I often write, I try to purge a lot and my physical shelves aren’t really that impressive. The books I do own to keep, are mostly favorites I reread and read again. But… I do always have books everywhere…

I tried to come up with a system of having the books I own in a hanging cabinet (double stacked!), and the new TBR books in another cabinet. That cabinet of course overflowed, I made a new one that was better accessible, and ended up with two instead of one. Oh, and there is another stack of books in another cabinet, these are the books I can give-away during book swaps. But don’t think I forgot about my stack of library books! These are hanging against the wall next to my couch.

A proper Billy bookshelf might have been more organized, but I do like how this is working. My books feel like part of the furniture and decoration.

Do you have any space for new books on your shelves?
It seems I already answered this question above, they will go to my TBR shelve. And if it’s a rereader, I would have to find some space in the hanging cabinet, otherwise it goes to my book swap stack or I will give it away some other way.

Do you decorate your bookshelves with anything?
Not really, my TBR shelve is shared with my stone collection, but to be honest, the stones were there first!

Show us a picture of your shelves!
My main shelve is on top, this one is my TBR shelve, shared with my stones collection. 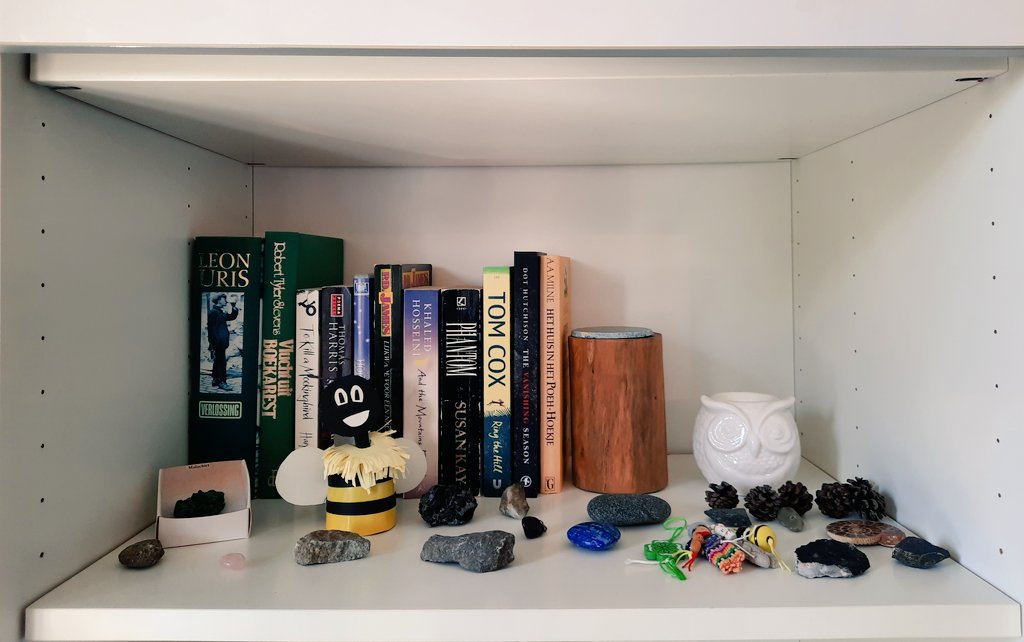