While the weather still remains cold and wet we are now past the last frost-date and indeed have better weather! It’s mostly to a southern instead of northern wind that the weather is changing nicely now, to 5-8 degrees (Celsius) at night and 12-18 during the day. It feels like we are at least 7 weeks behind though, but the weeds have finally started growing!

For the last two weeks I have been busy making the beds ready. There are a lot of self sowing plants in my garden, which I had to remove from places I don’t want them to be, or dug up and replanted where I do want them to be. And there were also many weeds to be removed, before I can start sowing. I don’t mind weeds. Their collective growing spurt means my soil is ready for seeds and that I can soon bring my pumpkins, sweet peppers and cucumber to the allotment. It was a bit much though. And as you can see on the pictures, I haven’t removed everything yet. 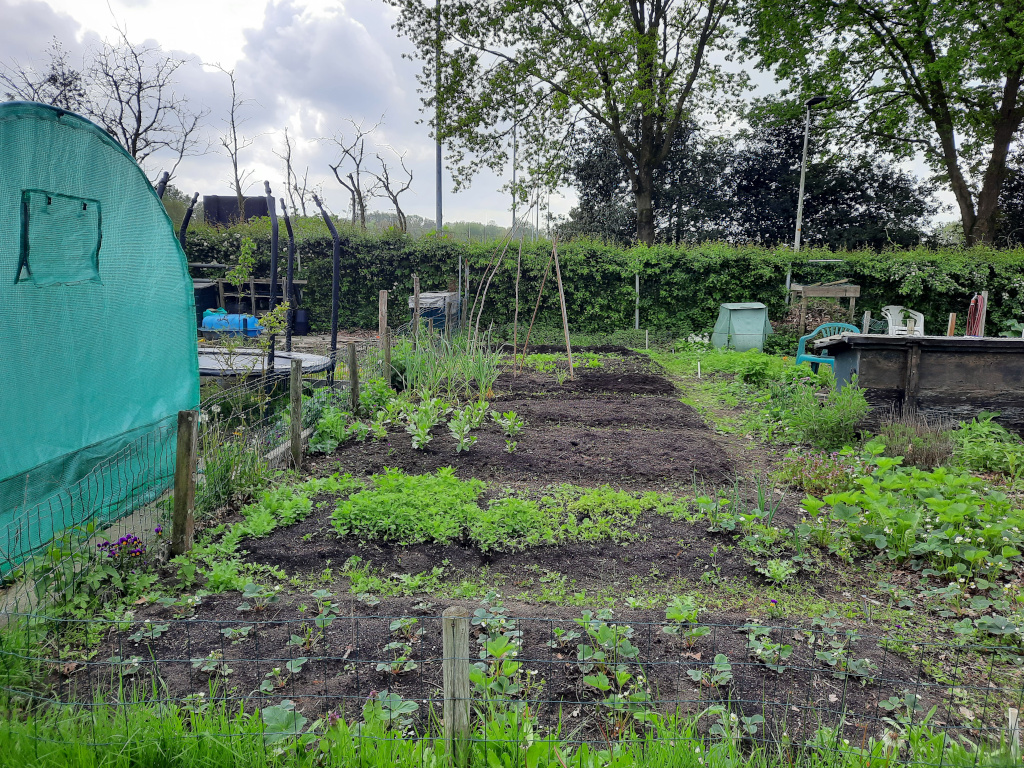 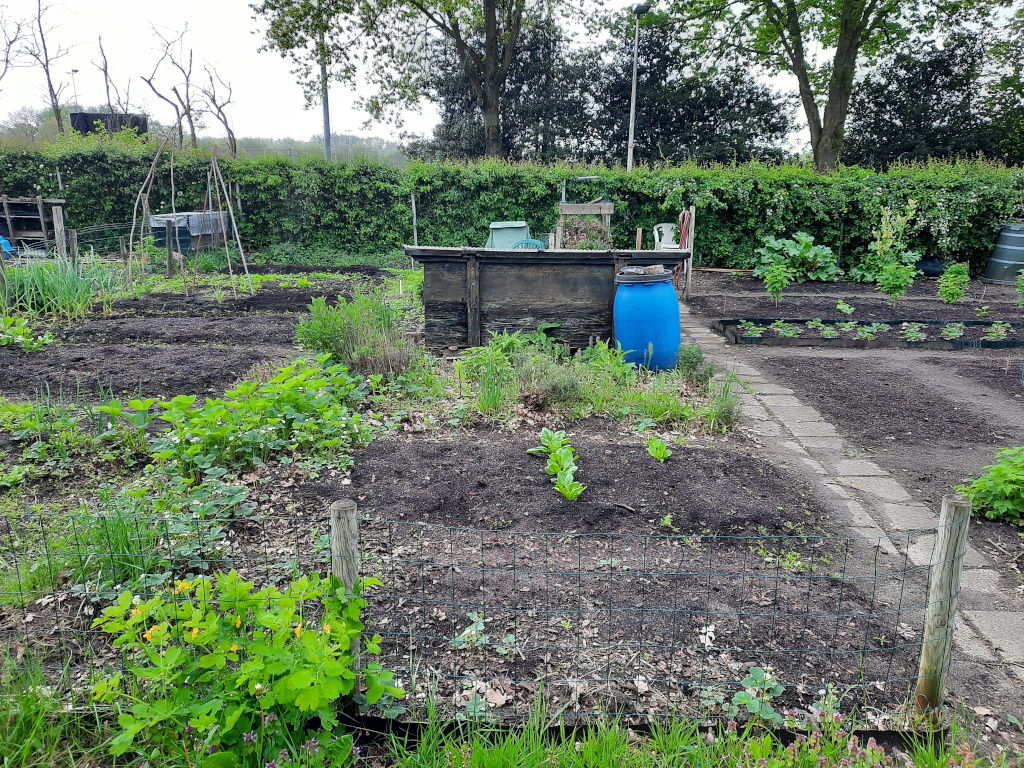 Next time I will make more pictures. I was hit with heavy rain after taking these first two and had to protect my phone. If you click on them you can enlarge the pictures to zoom in and see what has changed compared to my April update, but I will also write them below.

The first of the strawberry plants are in flower! The ones I have replanted are growing well too, but not all of them have flowers yet. I grow three different varieties, they will flower (and ripen) in three different stages.

Bed number two looks like a mess, and it sort of is and sort of isn’t. I haven’t yet weeded it because the sown carrots are coming up. Disturbed carrots attract the carrot fly, which I don’t need. These weeds will be cut back with scissors next week, and I will plant out my sweet peppers in between the carrots on one side of the bed and the other side already has red onions in between the rows of carrots.

In the third bed the broad beans are up and are also in flower! I should have pinched out the tops, but I haven’t got to it yet. I shall do that on my next visit. This bed will be shared with one of my pumpkins.

In the fourth bed my garlic bulbs are growing well. I am not sure what will grow next to it. Possibly my lettuces and other smaller veg.

My bean poles are up too! I’ve chosen to do two tipis of three poles. At two of them I am growing peas, they are already up and growing well. At three of the other poles I have sown Cobra and Berner Landfrauen snapbeans. And because you can never have enough different beans, I have also sown Saxa dwarf beans inbetween. This bed will be shared with one of my pumpkins.

The next bed is still empty and prepared for another pumpkin. It’s going to be a big one, so I don’t think I can grow something else with it. In this bed I have found a nice surprise though. One of my lettuces has self sown!

And the last one has got my potatoes in. I am already covering them up and at the back there now is a nice colder spot, to grow salads and spinach during the summer to prevent them from flowering too quickly.

The two in the back on the right aren’t ready yet at all. One of them will grow another pumpkin and the other one is for flowers and wildlife. I have topped up my compost bin with cardboard and leftover soil from pots at home. I might put another pumpkin in.

It is time to spend more hours on the plot now, weeding, sowing and to pick the first harvests! I already feel better about the coming year than I did last year, when it was so dry and hot not much got a chance to grow at all. This will be a bountiful garden year if I can keep up with it!