Wow, has it already been a month? April was really enjoyable for me, so time flew. I also read at my normal rate again, perhaps even slightly faster. Some days felt like I did nothing other than reading even though I know that is not true. But with the good weather reading in my camping chair at my balcony sure was a nice thing to do after working from home.

The books I read were a mix of ebooks (blue stars) for the #startonyourshelfathon and library books (green stars) from the “emergency mystery read package”.

#StartOnYourShelfathon update
Now that we are four months in, I am noticing that there are some books on my shortlist I keep skipping. I just don’t feel like reading them. And I also keep wondering why I put them on the list? Why did I want to read them? Hopefully that will change during the next eight months of this year, but there are probably a few that won’t be read after all and I will forward them to other readers. Also, I finished my first page! 🙂

Just a reminder to understand what the colors on my star-map mean:
Purple for physical books, blue for ebooks and… silver for books I own as ebooks but instead borrowed physically from the library. All the other books I will read will be colored yellow for books I already own and green for new/others. And books I did not finish will be pink..

And this is how my #StartOnYourShelfathon BuJo-pages are looking right now! 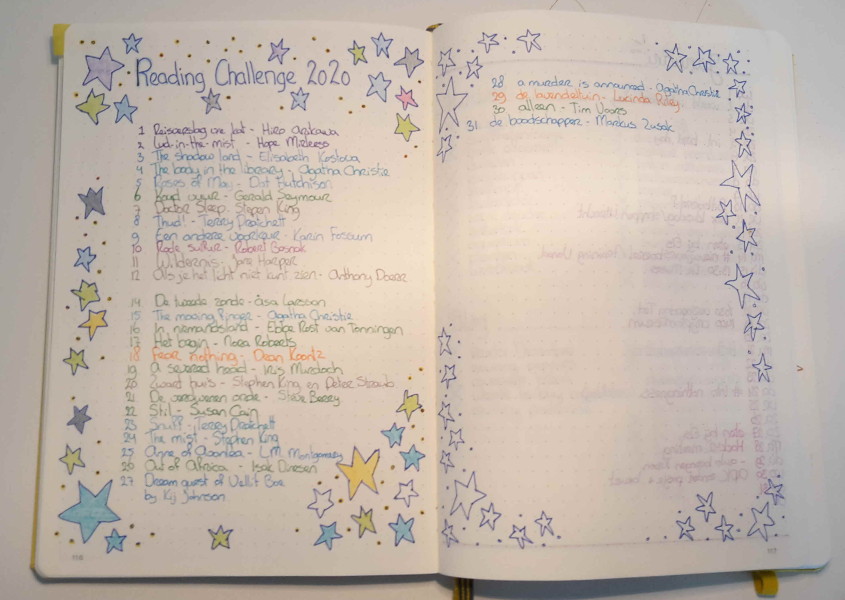 So let’s get to it! What did I read this April?

21. The Lost Order (Cotton Malone #12) by Steve Berry 3/5 (green star)
I liked it, but it wasn’t awesome. The beginning is rather confusing, it takes a while to understand all the different characters (there are quite a bunch!) and how they are all linked together in the story. Even though American politics isn’t a subject I am interested in, the involvement of the Smithsonian made it intriguing enough. I do feel there are some open ends that do not match.

22. Quiet the power of introverts by Susan Cain 4/5 (green star)
Interesting read, it took me the entire month to finish. There is a lot of scientific information available in this book. For example that introversion and extraversion are measurable in young children and also that it is measurable in the brain (amygdala). This was a surprise to me.
Susan Cain has done well collecting all the researches and making them easy to read. She put a light on a lot of different angles. But it is so much! I don’t know yet what to do with all of this information. I would definitely have to read it again sometime.

23. Snuff (Discworld #39) by Terry Pratchett 3/5 (blue star)
This last City Watch story started out feeling like a regular Miss Marple, up in the countryside where everything and everyone could be crime related. And it was, but with the twist of some Sam Vimes combined action. There were many social subjects at hand again, the most important one being “human rights” and “slavery”. I am sad this is the last one of the series, which started out with the stories of Constable Carrot but ended with the heroic adventures of the noble Commander Vimes. And I am very curious to see what other lessons Discworld will bring me in the other series.

24. Anne of Avonlea (Anne of Green Gables #2) by L.M. Montgomery 2/5 (blue star)
When I started this ebook, I believed it would be a quick read. But it was just a normal read. Anne of Green Gables didn’t leave me with that hearth warming feeling a lot of people have. And neither did this one. Most of the book are randomly collected stories. Yes, they are lovely poetic and romantic, the way Montgomery can describe a surrounding area is relaxing to read. But the lack of a true story line is boring to me. Just like the first Anne-novel, it isn’t until the last quarter that a true story unfolds itself. It’s saddening to me that it takes an awful lot of time to get there.
Another thing bothering me is that I feel Anne finds herself too good. Yes sure, she whipped a boy in school, but she also favors one twin over the other and even another boy over her own adoptive children. She is both pressing as ignoring “the way one should act or look like”, manners are a true thing but I feel she is lacking some herself. This snobbishness is probably normal for the age it was written in, but it never before annoyed me in other books as it does in this one. Maybe I should have started the Anne-series as a teenager, instead of an adult to get out of it what others praise the series for…

25. The Mist by Stephen King 4/5 (blue star)
This short book has a really nice pace to it. The story itself is rather entertaining, I read it in one day! Even though we don’t get any answers about what actually happened, how it happened and if anyone actually survived, it feels as a complete and whole story. If you are into suspense, you should really try this one!

26. Out of Africa by Isak Dinesen 4/5 (green star)
This was in my “emergency mystery read package” from the local library and I am glad it was because I’m not sure if I would have chose to read it myself. Reading Out of Africa was just mesmerizing. So dreamily full of love for her surroundings. There is some chaos in the stories, when you get distracted from the actual story by all kind of side stories, but then you are suddenly back and you remember and all the sides stories are so beautifully written I didn’t mind at all. It was like listening to a real-life storyteller, painting a picture of her beloved place, her beloved people, but with words on a paper. I kept forgetting that this all was early 1900’s, as lively as it all felt. Africa is a different continent today, but it really felt that I somehow, suddenly was there.

27. The Dream-Quest of Vellitt Boe by Kij Johnson 2/5 (blue star)
It seemed like an ever ongoing changing of surroundings, where not the destination but the travelling is the main event. It wasn’t bothersome though, but halfway through it did feel like nothing else would happen and it reminded me of reading the Hobbit.
The world building was very nice, but even at three quarters I still felt that the depth of a good story was missing and that not much was happening. When there was though, there were lots of gaps. I can see how some might love this book, of a traveling women on a mission to get a girl who turns out to be a God, but these kind of tales are not my cup of tea.

So these were my April 2020 reads. Have you read any of these too? What did you think about them? Do you have a recommendation for something similar? Or is there anything you would like to know? Ask me in the comments!

3 thoughts on “My April 2020 reads and #StartOnYourShelfathon update”