This weeks TopTenTuesday is all about animals from books, instead I will tell you some stories about my own cats. They are of course my favorite and join me on many reads!

Currently I have two cats, they are both born in this house, about 16 years ago. One has been going about on three legs for the last two years and the Ginger Cat still has all her parts. They are both really funny and this year of not going anywhere have made me realize I really laugh out loud often because of them. So here, in random order, are some of their goofy acts.

This is them being born, back in 2005 when their mom was still alive. They were so tiny! 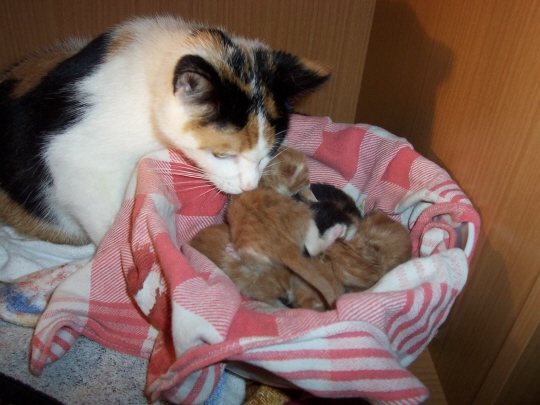 The Public Transport Pranks
When the Three-legged Walrus was still a kitten, she could scream LOUD and long whenever I was in the kitchen to get some food. One day I recorded it with my phone and it was such a good noise that I started using it as my ringtone. Back then (mind you, this is 15 years ago) ringtones weren’t so sophisticated yet and often confusing because most people used the same one. But with this recording I know wherever I was whatever I was doing, that is was my cat crying and therefore that it was my phone ringing.

But… it was also the time I still used public transport A LOT. I needed it for work or to visit my ex-partner, or to visit my friends. I soon discovered that the ringtone was SO GOOD, that when I was sitting in a train or a bus and my phone started crying, everybody in the vehicle started to panic that there was a cat trapped somewhere and started searching for it. It was hilarious! And so I started using it as a prank everywhere. In the stores, at work, whenever I was somewhere with (enough) new people and needed a break, I made my phone cry.

Sadly the recording doesn’t work anymore. It was still my best ringtone ever. Not because of the prank, but because I actually knew it was my phone ringing. These days it’s just on vibrate, because I dislike all the noises that come with current phones.

The Chair incident
A while ago my sister was visiting us. Because my house is small and we have to social distance, I had to use the chair previously know as the reading chair, but currently known as the cat chair. Our Three-legged Walrus sleeps in that chair A LOT. So I cleaned the chair, put a new fleece on, and offered it to my sister to sit on during her visit. The Walrus was meanwhile sleeping on a pillow on top of TWO of her old fleeces, like a princess. But after an hour or so she wobbled through the room, sat in front of my sister, looked her right in the face and sounded off a very determined mew. YOU ARE IN MY CHAIR!

This is her, joining me when reading. 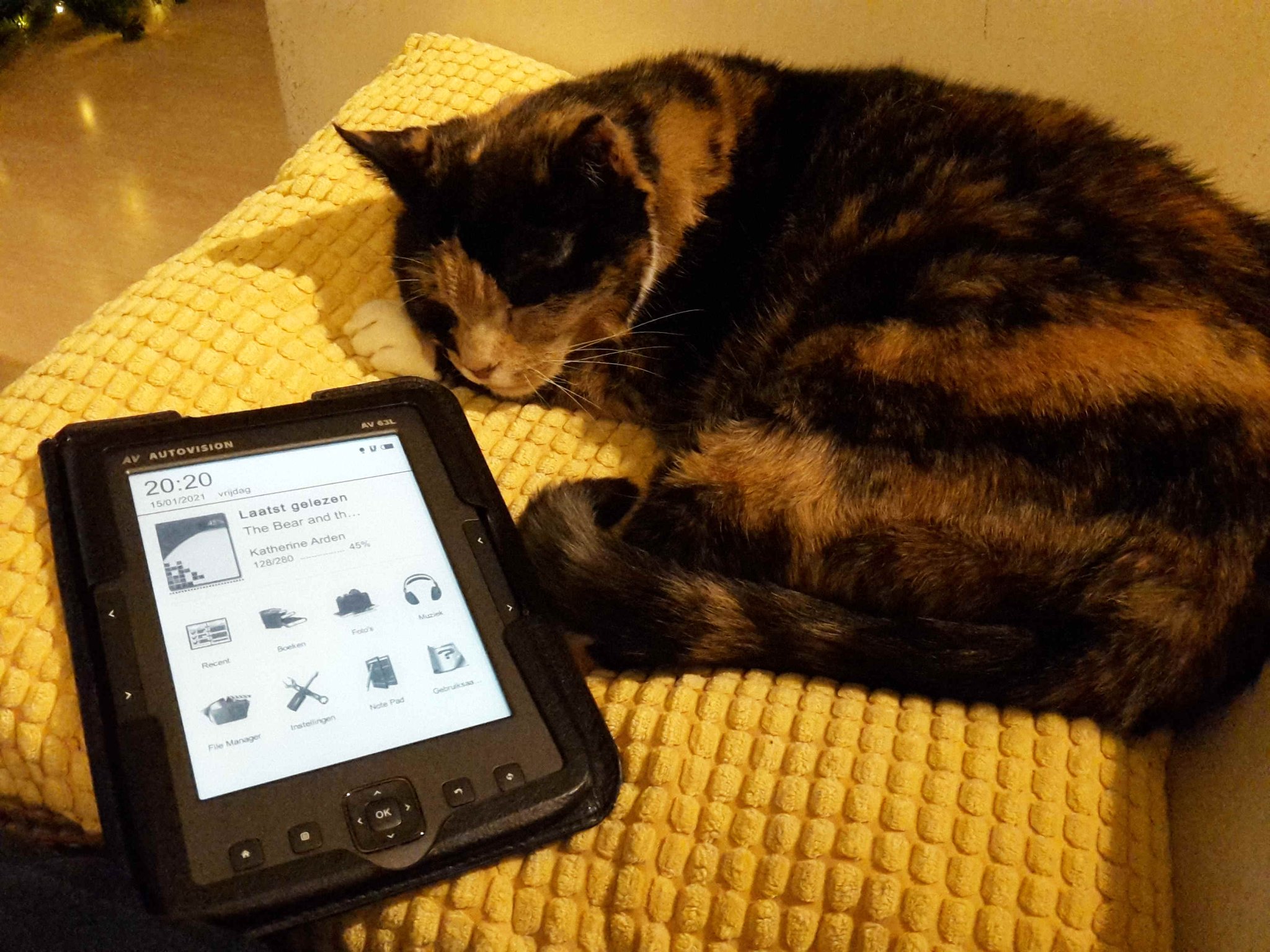 The Tail Chasing
My little Ginger Cat has never been really brave. But she likes climbing. A lot! Last year, when the houses in our street were being repainted, she climbed the constructions and started catching birds. It wasn’t a very pleasant time for me and the birds, but she was very happy with herself. Who would have thought she would learn how to be a killer cat as a senior?!
But this year when spring was arriving again, her enthusiasm level (and she can be VERY enthusiastic) was again also rising. So when I am trying to concentrate on working from home, that weirdo Ginger is running around circles on the couch, making weird hunting noises because…. SHE HAS DISCOVERED HER TAIL! Oh yes. She’s got one. It wiggles. It moves. SHE MUST HUNT IT!

Here she is sleeping it off after a big chase. 😀 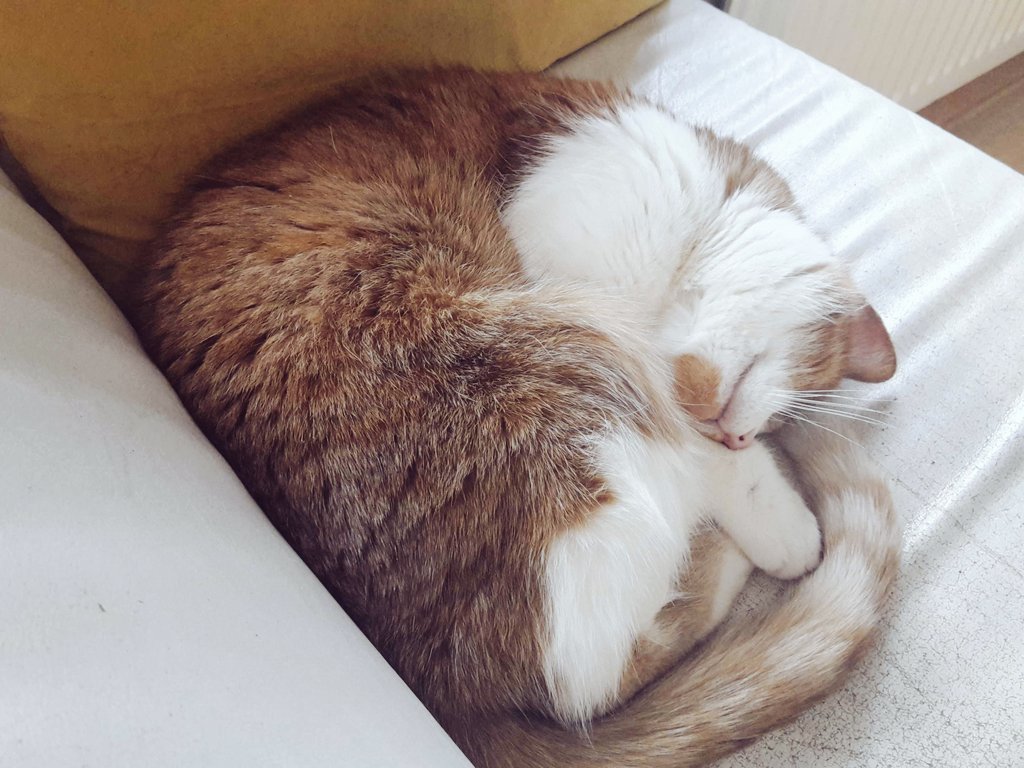 These aren’t ten stories, but I think the read is already long enough. What about you? Do you have pets yourself? Or did you participate in this weeks TopTenTuesday and wrote about your favorite animals? Share with me in the comments, I would love to read your stories too!